Why does light exposure matter for health? 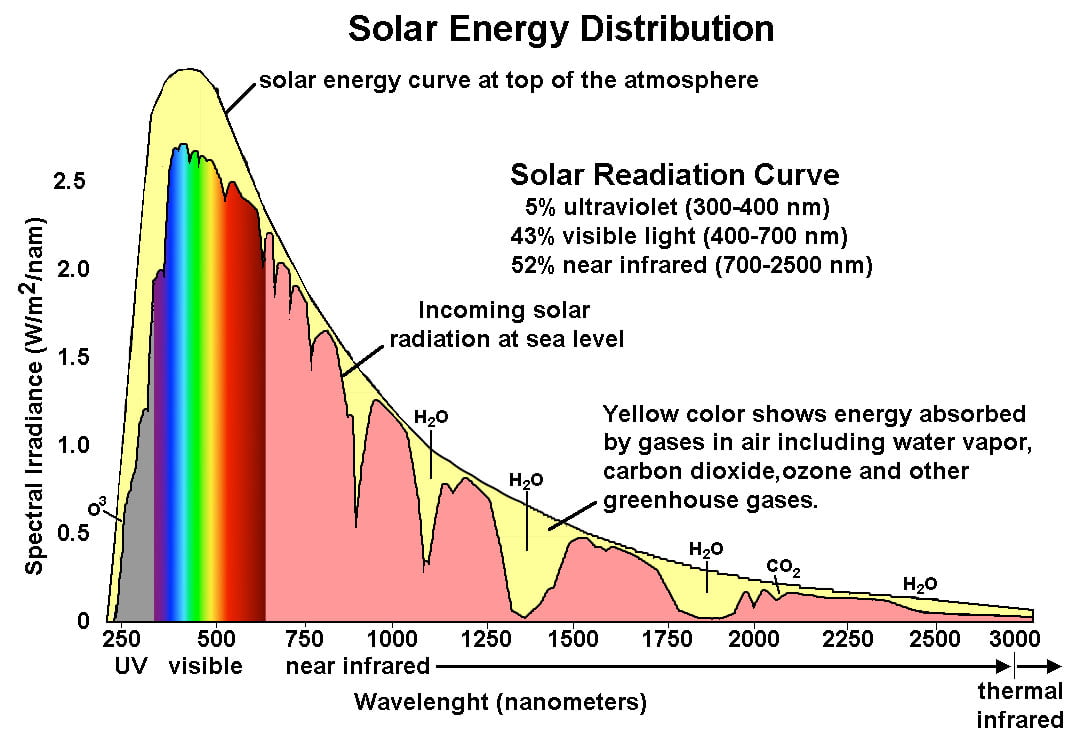 This is what the solar spectrum looks like, more or less, and there are 3 main portions we focus on in regards to health:

Benefits of Vitamin D include: improved immune response, reduction of depressive symptoms, increased metabolic health and weight loss, promotion of calcium absorption and bone mineralization, and a reduction in inflammation.

What about the damaging effects of UV light considering that it is ionizing radiation? 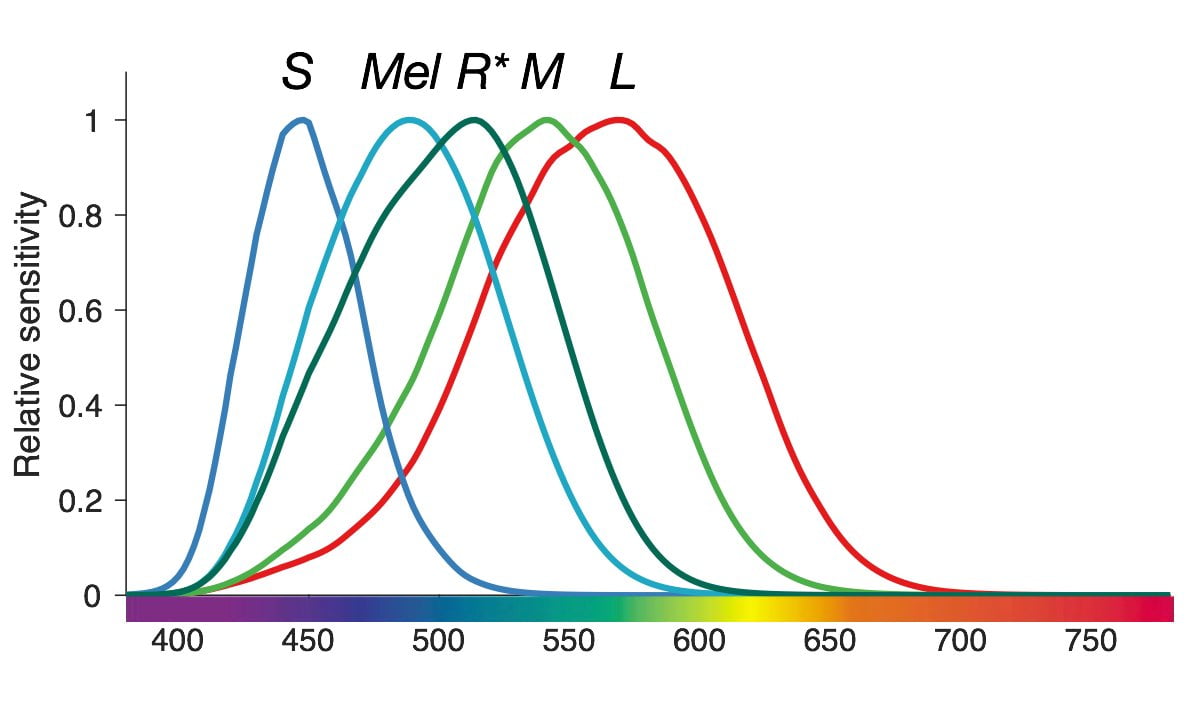 Different portions of the visual spectrum of light have different biological effects, however, there are two key portions that we have interest in.

The light blue wavelengths stimulate melanopsin containing cells, which act as wakefulness/sleepiness controllers. These are the key wavelengths and photoreceptor pathways that we want to stimulate during the day to promote alertness and circadian regularity. The Sky Portal uniquely promotes circadian and mental health through stimulation of these light blue wavelengths through drowning out short wavelength dark blue light from your ambient lighting and screens by causing your pupils to contract with long wavelength sky blue, while also providing near-infrared to mitigate the damage from the remaining high intensity blue that doesn't fully get eliminated.

Red wavelengths are equally important. Studies have shown red wavelengths to have beneficial effects on skin health and appearance. Furthermore, research has found deep red light (660 nm) to stimulate an increase in VEGF (vascular endothelial growth factor). This drives growth of new blood vessels and capillaries. Whereas another study, in mice, has found reduced free-fatty-acids and improved insulin sensitivity from 635nm red, i.e. the light made the mice less diabetic. 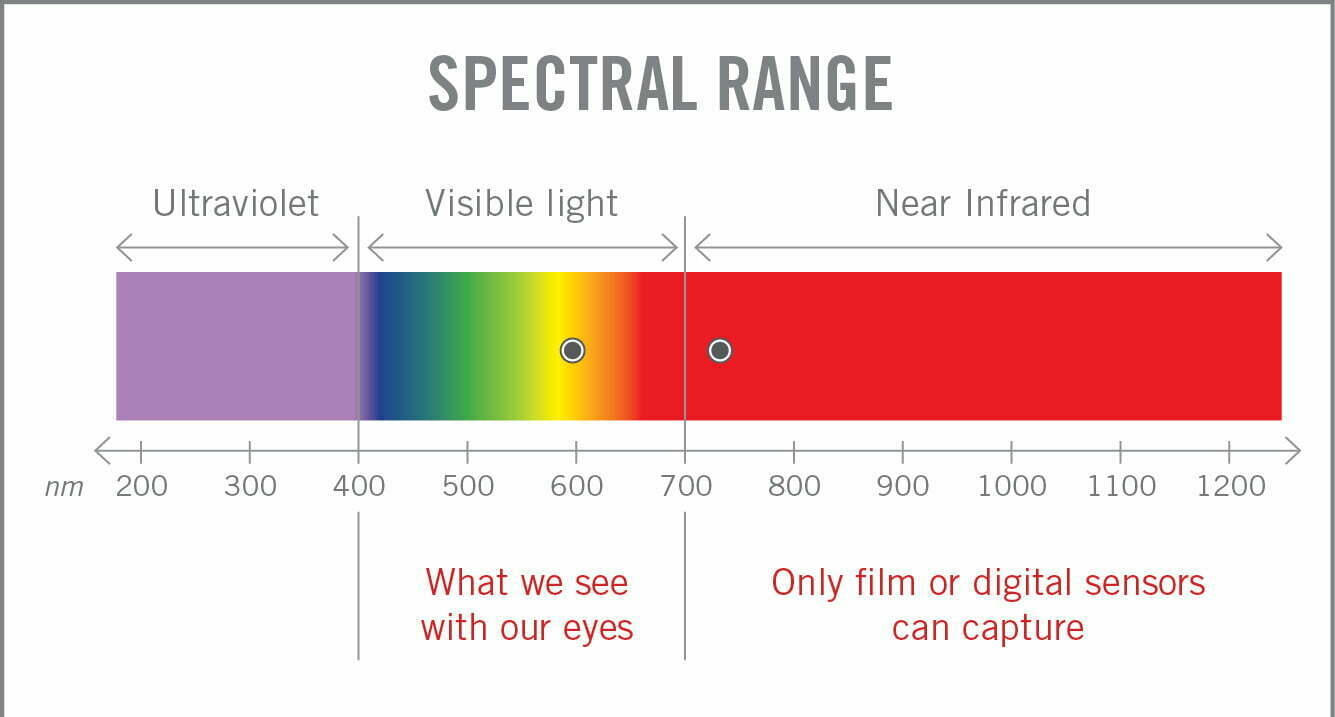 Since Near-Infrared light interacts with mitochondria, it has an almost "do-everything" spectrum of effects. If you want to dive-in to what that means, you can skim through this spreadsheet summarizing the several thousand studies on the topic, which also lets you see what wavelength and power was used. Michael, founder of Chroma, became interested in near-IR light after partially tearing a pulley in his finger while rock climbing. Some of the main effects people are interested in with near-IR are cognitive and sleep enhancements, better looking skin, hypertrophy and faster recovery from physical training, pains/aches, and hair re-growth.

Why Chroma over other companies? 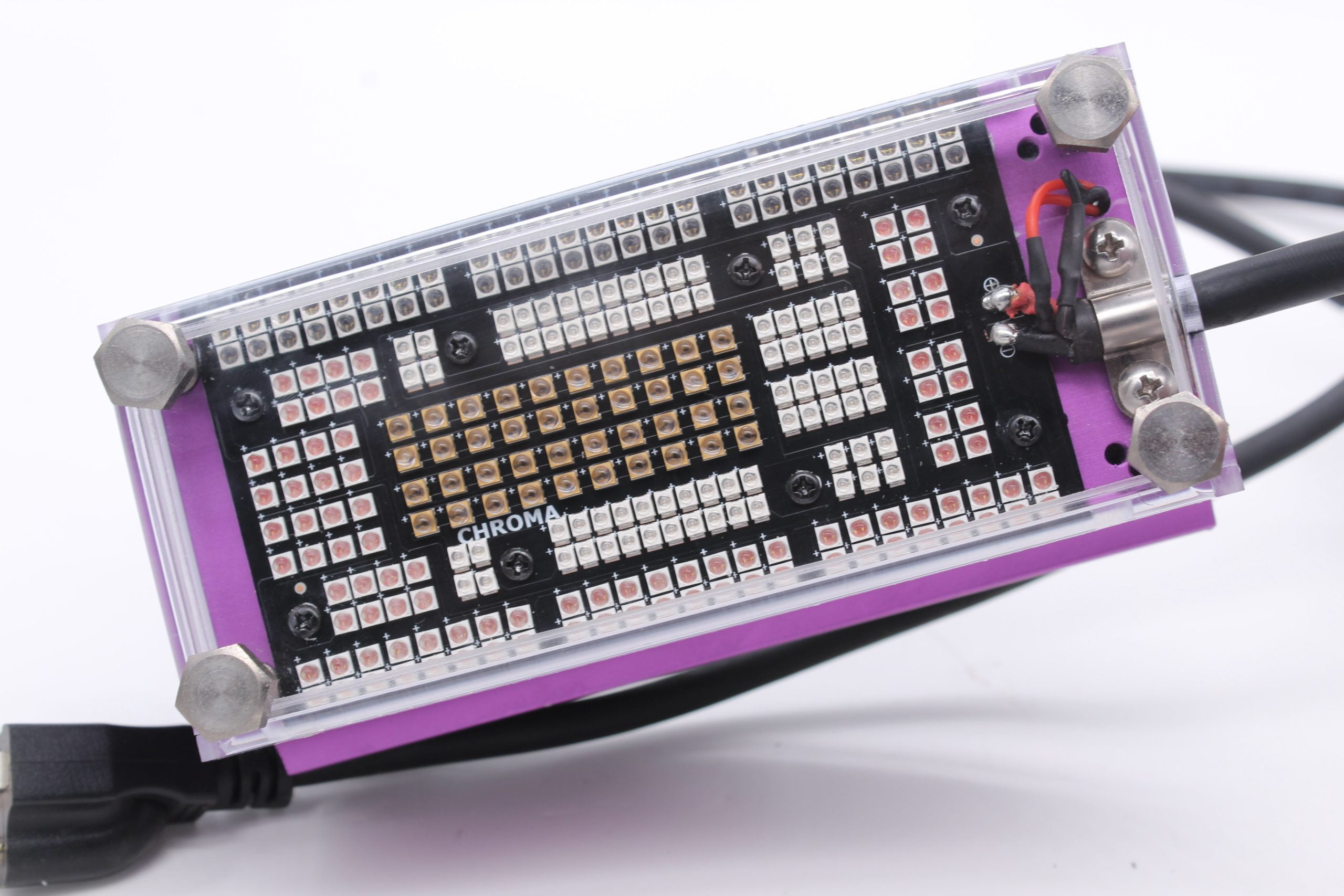 Other products in this space are built almost exclusively by non-engineers who use "industry standard" misrepresentations of their power output and EMF.  Nearly every panel is an off the shelf greenhouse light with the LED's swapped out and a brand name slapped on. By contrast, our purpose built, small but power dense device can be used like a large device, but the reverse is not true.

The reasoning behind the Ironforge, and D-Light devices is that in addition to the systemic effects, there are tons of localized benefits, which may require a concentrated dose to get the maximal benefits. Some examples: targeting specific muscles being trained on that day; targeting injuries/pains; targeting cerebral benefits; targeting endocrinological/hormonal effects; targeting hairline or face for aesthetic purposes.

Compared to a big panel you can have doses on the order of 100x in localized areas. If you know about red light therapy, you'll know there is a biphasic response curve and you don't want to get too much, but the problem is that with a regular panel, you might only be getting 1-5% of what you want for something localized. But then if you do want that whole body effect, it's just as easy to pass the device everywhere and get that. Compared to a greenhouse style panel, the whole body effects still work better because the majority of the light actually hits your body, whereas being a foot way from a panel might mean 80% of the light goes off to the side.

Most greenhouse style red light products mix red and near-IR 50:50 in the same device. Near-IR is a lot better than red light for the primary reason that the longer wavelengths are able to penetrate further into tissue, whereas the visible red or deep red light is mostly absorbed in the skin. Red light might do some things 1.5x better than near-infrared at the skin, but near-IR is 10x better for everything else. The IRONFORGE uses 80% NIR and 20% deep red.

The IRONFORGE makes it possible to get enough near-IR where you actually want it, or pass it around your entire body and actually have it hit your body rather than losing most of the light to the sides.

First, Why Is Blue Light So Bad?

Blue light is not all bad! It's actually present in sunlight, it's part of what energizes us when we're outside. Luckily, it is not the entire spectrum of light that has this effect, but only the blue and green portion of the spectrum. However overexposure of blue and green light is what affects our health. Once the sun goes down our devices that project blue light do the most harm. The computers, phones, TVs, and even ordinary lightbulbs we use have been scientifically proven to disrupt sleep via melatonin suppression and other pathways.

At night, blue light tricks the brain into being more wake. This negatively impacts our natural melatonin production and the many other metabolic pathways of the circadian rhythm (your natural sleeping pattern) which are vital to maintain for long-term health. Regulated Melatonin production is vital for deep and restorative sleep for optimal performance and productivity throughout the day, and this is where Carbonshade comes in. Typical 'blue-blockers' as they are commonly known only block a fraction of this range harmful to your health. Our glasses block out 99.8% of this harmful light to protect your sleep cycle and immune system.

A natural circadian rhythm looks like the graph in red. This individual has a higher production of melatonin over time because of low exposure to blue light. This means that the body is able to smoothly and quickly transition into a deeper sleep state.

The graph in blue shows an off balance circadian rhythm. This individual is being exposed to blue light and because of this, is having a much harder time falling asleep. Their brain has been preventing melatonin from producing, which is making it harder for the body to initiate the sleep cycle. Because this individual never reached a deep sleep state, they won't feel rested enough to tackle their day with energy. Carbonshades exist to allow you that peace of mind and energy. Sleep with ease and wake up ready for anything!

Why Red Lenses? Why not Yellow or Clear?

Turns out, red is the best color for blocking the light that inhibits sleep. That's because it's not just blue light that interferes with our circadian rhythm, as the term 'blue-blockers' would suggest – it's also green light. Specifically, it's light in the melanopic action spectrum of 400-570nm.

Unlike orange and yellow-lensed glasses which block less than half of the unwanted light, Carbonshade's red lenses block over 99.8% of the light in this range.

We use extremely durable, polycarbonate lenses with optical properties originally engineered for high-power laser environments. Our red lenses look beautiful and are 3rd party verified to block over 99.8% of the total light across the entire spectrum known to trigger melatonin suppression (400-570 nm), far surpassing the capabilities of yellow or orange lenses, let alone clear lens 'blue-blockers.

The Best Time to Wear Carbonshades? 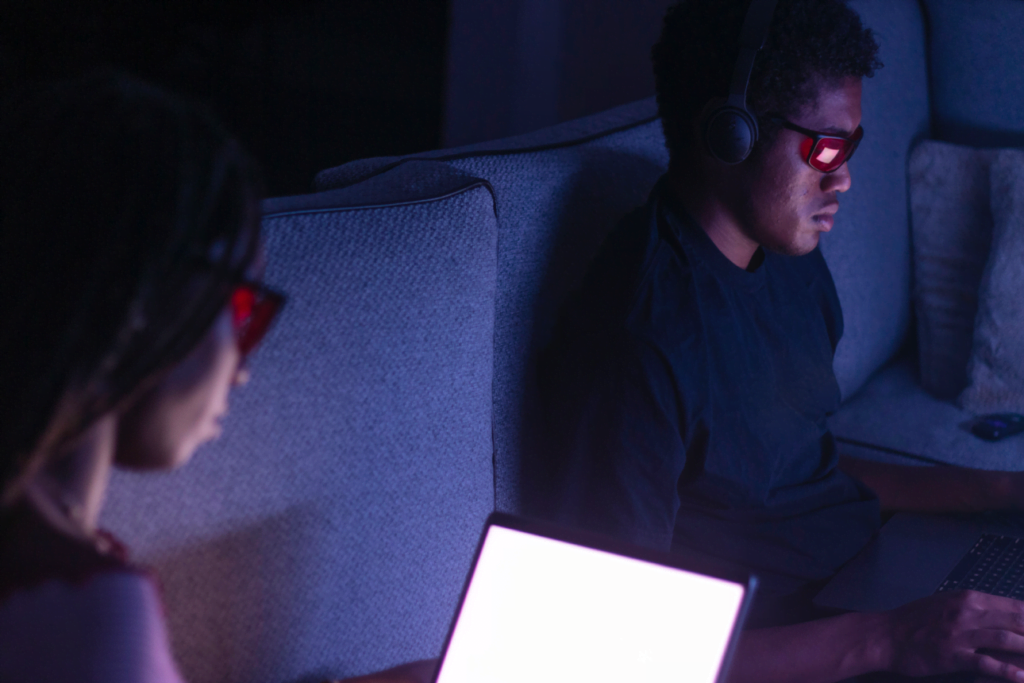 Carbonshade glasses are worn in the evening prior to going to bed. It is in these crucial hours that light exposure tricks our brain into thinking it is daytime. Block the responsible light and go to bed every night relaxed, knowing the following morning will feel great. Carbonshade is the leading wellness technology company, with customers in over 60 countries who love how great sleep makes everything better. 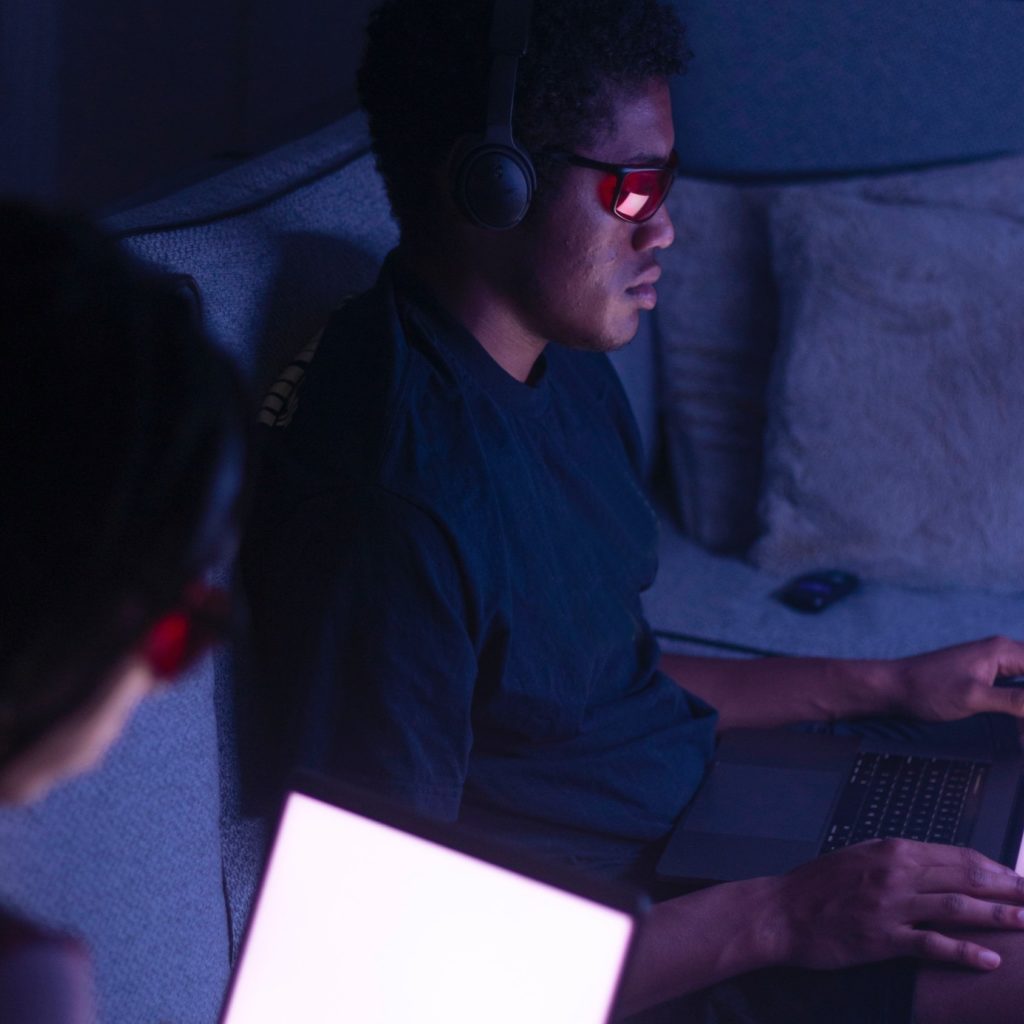 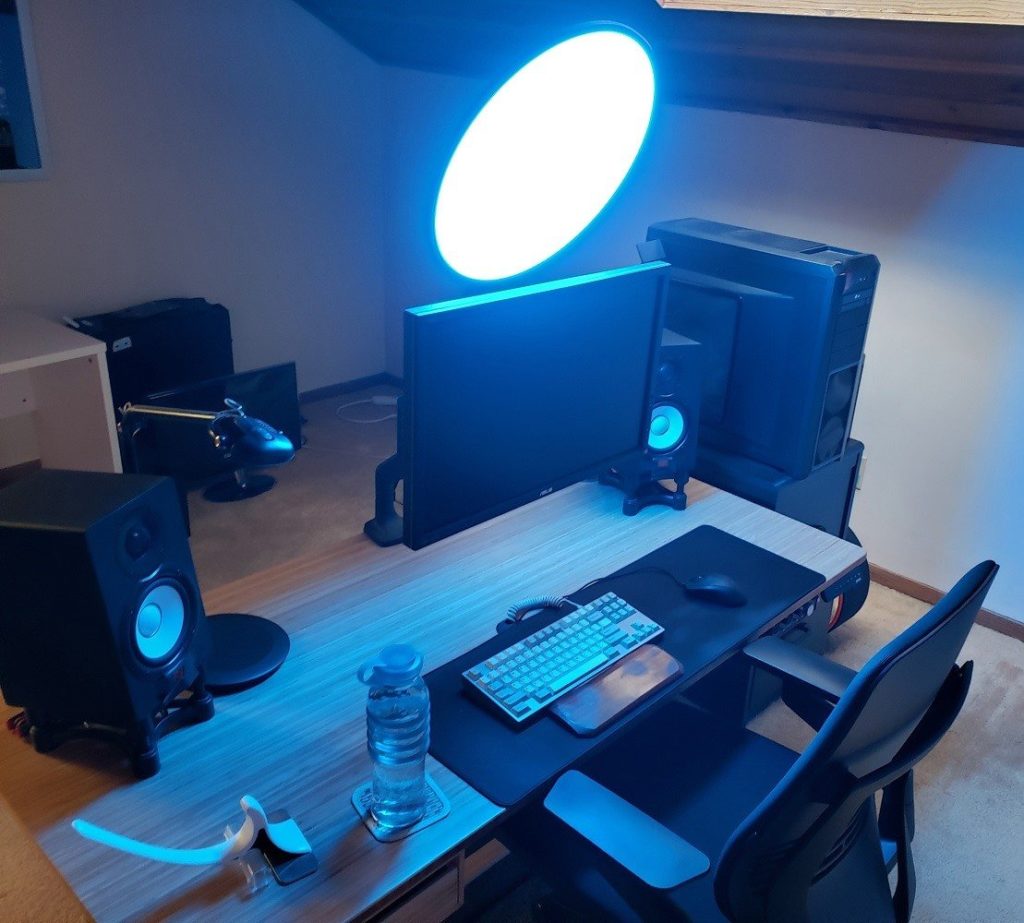